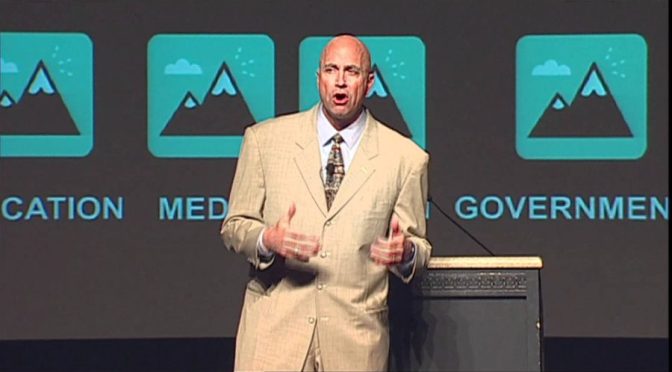 Dudley Rutherford is a hero.

Before you spit up your Chick-Fil-A sandwich, scroll down to the bottom of the page, and make sure you are reading the right author, let me explain. I have some minor issues with some of the recommendations of his Dream of Destiny, too. And all that window-dressing your worship stage like a Benetton ad to prove you’re not a racist business. All that cause célèbre stuff leveraged to extend your brand. The truth is, cultivating a racially diverse church in Los Angeles is sorta like taking credit for discovering the Mississippi River – we’re all happy about the discovery, but it’s not like it wasn’t going to happen anyway.

Still, Dudley deserves credit – a lot of credit. Because while Shepherd of the Hills is technically within the Los Angeles city limits, there is a vertiginous cultural difference between the affluent suburb of Porter Ranch and the exotic wonderland that is the City of Angels. I mean it is no mystery that there are two lily-white megachurches within walking distance of Shepherd of the Hills (something Dudley likes to point out). That reality comes into focus once you consider the trial of four LAPD officers,  caught on-tape beating an unarmed Rodney King, was moved to the valley – minutes away from Porter Ranch – to ensure a fair outcome. My point is, the only thing required to facilitate a racially diverse congregation in Los Angeles is to not be a racist – which Pastor Dudley surely is not and is anything but. In fact, that – Dudley’s character – more than any other factor, would account for the glorious diversity of such a tremendously open and loving congregation located within a community that is perceived as quite the opposite. He is demonstrably a hero for nurturing and supporting that Biblical, though perhaps not popular, mindset since taking the helm.

I do have a pretty good idea what I’d do, however, if I had the kind of big following Dudley’s got. And it would not be the same as what he has done with it.

Say what you will about how well, or how advisedly, but Pastor Dudley Rutherford puts his faith on the line. The sincerity with which he focused on traditional marriage, religious freedom – debating the tests of political and religious tolerance – is largely, we all know, unwelcomed, and, relative to potentially more purely church-growth-oriented exercises, maybe not the best of options.

Dudley would clearly prefer to be an annoying nag, calling society-at-large back to God’s perfect design for marriage and sexuality, than to become more popular. You have to admire that. Sure he’s still the minister of one of Los Angeles’ largest megachurches – but you gotta respect a guy who manages to risk it all in order to take-on one of the most divisive issues of our time, in one of its most hostile environments.

Believe me, it’s rarely a good career move to have a conscience.

If experience teaches us anything, it’s that the very last thing the masses want to hear or be reminded of is how bad things are, how unhealthy, or how doomed – that we’re heading off a cliff and dragging our kids after us. (Unless it’s accompanied by bombastic accusations of Bible thumping – and a suitable candidate to blame for the problem.) It’s bad business to be saying all sorts of awful, alarmist things like that – particularly when it’s true. It is much better ministry, always, to tell people, over and over again, in a reassuring voice that everything is just fine. It’ll all work out. No need to worry. You’re great! You’re awesome! Pursue your destiny!

Dudley Rutherford is a hero for doing the harder thing – when he surely didn’t have to do anything at all. In all sincerity, it was one of the most . . . encouraging things . . .  I have seen in my life. Some celebrity pastors, were they where Dudley is on the Success-O-Meter? They’d be holed up at a Four Seasons somewhere, shades drawn, counting their money and trading futures from their virtual, online trading desk.

So, for seizing the opportunity, for paying sufficient respect to the interpretation of Scripture, for glorifying Jesus Christ against a backdrop of a lost and dying world – for this – I will always hold Dudley Rutherford in the highest regard. He is not just my peer – he is my better.

3 thoughts on “Dudley Rutherford Is A Hero”