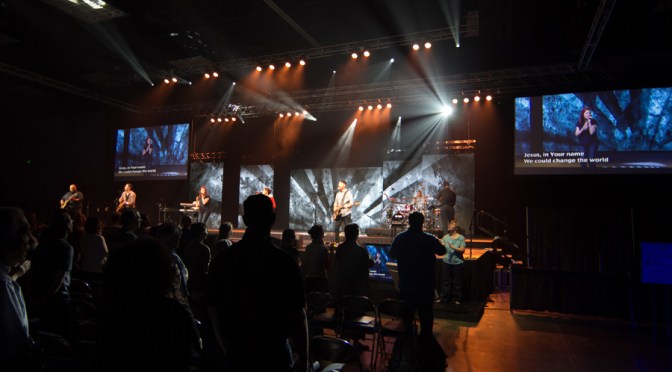 Chances are you or someone you know has attended the North American Christian Convention at least once during your lifetime.

Chances are, today, the mention of that name manufactures little more than a passive sense of indifference – save a few blurry memories or lingering feelings of nostalgia from your childhood.

After 89 years of existence, something unexpected is happening . . . and it ain’t good.

The past two years of the convention have been dark. Empty seats are frequent – cordoned off behind curtain walls.  Of the few onlookers who did participate this year, more than half reported being new to the convention and, most likely, were unaware of the Restoration Movement, its challenges, or its history.

Near the turn of the millennium with the rise of church marketing strategies, the diminished role of church elders, and with a new taste for self-determination, mega-church pastors gained enormous influence within the NACC’s various administrative committees. After a decade of competing visions for the future, celebrity pastors consolidated power and now refuse to let go.

But let’s back up a bit. From 1832 – 1901 hundreds of thousands of Christians joined an assembly known as the Stone-Campbell Movement (later the Restoration Movement), and early in the twentieth century – through consensus and as a result of internal division – one wing of the movement came to be referred to as unaffiliated Christian Churches. The first to join were Christians seeking unity based on the elevation of Scripture over and above denominational creeds and traditions. By the 1930’s, a handful of Bible colleges and seminaries were established in Nebraska, Oregon, Kansas, Ohio, Kentucky, Tennessee, Missouri, Texas, and California. Additionally in 1927, dissatisfied with the Disciples of Christ Memphis Convention, the unaffiliated Christian Churches began a national convention of their own. Since then, aided by the expansion of commercial air travel in the 1950’s, the NACC has played a central role for providing ideas, inspiration, and identity to New Testament Christians guided by the lodestar of the first century church.

So 2016. Things have changed. The old guard was deposed and sent packing by what sure looked to me like a hijacking, carried out by a cadre of elitist mega-church pastors and their wannabes. Two years ago Tim Harlow implied that – absent the likes of him and Mike Baker – the NACC was on its last leg,  “reflective of a movement stuck in the same dimension.” He prognosticated that he and his enlightened New Breed would help us evolve to a higher plane, leading this movement and its convention to “change the world.” Anyone rallying to his cause was proof, in and of itself, of the cosmic superiority of . . . those who rallied to his cause.

I remember thinking, “Someone should get that man one of those ‘I’m Kind of a Big Deal’ T-shirts.

The thing is I am very sympathetic to the argument that we need to be willing to change our methods, that we need to look for ways to build unity and tear down walls, that we need to break out of this nostalgic 1981 Christian-ese bubble and respond to culture on its own terms. But when you get to: “Therefore we need to rewrite biblical guidelines for gender roles because up-and-coming millennials believe them to be chauvinistic.” I want to scream, “Are you high?!”

What is unprecedented about this year’s attendance is that more than half had never before attended the NACC. So while Mark Taylor praises Dave Stone for a job well done, it should be noted that President Stone managed to prune the size of the convention’s historical base down to a couple of thousand people (800 of which were presumably teens from the adjoining CIY Move conference) – and what remains struggles to survive.

When asked about those who did not support the convention, Stone quoted church-growth guru, Kennon Callahan, saying “the day of the denomination is dead.”

Apparently, this lack of “denominational loyalty” somehow justifies the convention’s high tolerance for false doctrine. All things considered, Stone’s “prognosis” that the “future is bright” would have probably gone down a lot better had convention crowds expanded rather than contracted under his watch.

The staple argument convention dignitaries continue to make is that they no longer ascribe to denominationalism. What that means is they, as a matter of philosophical principle, reject the very idea of sound doctrine. They are unifiers and only care about what works. Simply put, doctrine will, for the foreseeable future, continue to be loosely governed. Everything is permitted. Nothing is forbidden. Anyone with the temerity to advocate for sound doctrine is demonized as a denominationalist blinded by jealousy, unconcerned with reaching the masses.

One need only read the Christian Standard here to understand that we are dealing with a unity cult besotted by the notion that there are no such things as biblical absolutes – but simply “tribes” who value various particulates.

The end result? Like the Pharisees of old, these religious populists have decided that Truth needs to be crucified in order to preserve temple unity.

Incongruously, President Stone, like last year’s president, Mike Baker, rhapsodizes about our Restoration Movement forefathers, invoking cliché after stammered cliché about local church autonomy and how “our forefathers were consumed, not to build fences, but to tear fences down.” Stone then concludes his comments with an audaciously cynical plea for everyone to “come back to God’s word.” But five minutes’ worth of serious thinking is enough to bring into question whether Stone is even serious about his most vanilla banalities. There is no serious person — regardless of which side you are on — who believes that Tim Harlow, Dave Stone, et al have, after great efforts of wrestling with scripture through prayer and wanting to chart a biblically sound course through culturally choppy waters, conferred and concluded that egalitarianism is the Will of God. And yet that is the new norm.

And as far as what consumed the minds of our forefathers, Dave Stone would do well to heed these hauntingly relevant words from R. C. Foster, published in a 1950 essay condemning apostasy and the unity cult which had gained a foothold within the NACC’s continuation committee in 1940.

“The North American Christian Convention held in Indianapolis in Oct. 9-13, 1940,  . . . ‘the powers that be’ had attempted to see that there was no controversy, that radical and conservative should have loving fellowship together without any discussion . . . The slogan of the pioneers declared: ‘In faith, unity; in opinion, liberty; in all things, charity (or love)’.  This . . . [they now] change to read: ‘In the things on which we agree, unity; In the things on which we disagree, liberty; In all things, the will to be one.

‘The will to be one’ is the determination of the hierarchy to herd everybody into the one great super-organization.  But the Christian will continue to urge that all should be one in Christ. . . ‘Choose you this day whom ye will serve, but as for me and my house, we will serve Jehovah.’”

In Dave’s thumbless grasp of leadership, he fails to understand that unity is only desirable when compromise is in service to a more nobler cause. In the past, the nobler cause was to give preeminence to the authority of Scripture. What nobility is there in, now, compromising that authority – not to mention the stability of the nuclear family? The higher, more nobler cause seems only to be American comfort lust.

So there is simply no way that Dave Stone or anybody else can realistically make the argument that unity should be our overriding value. Yes, there is a place for unity. Unity is commanded in scripture and it is critical. But the highest Christian value is obedience. In fact, we were issued the apostolic writings and told to correct, instruct, reprove, and when necessary separate in order to prevent the masses from deciding for themselves what is or is not acceptable to God.

The reality is these celebrity pastors have decided that theology doesn’t matter and view any discussion concerning gender roles (or anything else), not as competing ideas, but as simply a hammer and tongs struggle for power. All calls for unity are, in reality, thinly veiled calls to acquiesce.

Don’t get me wrong, it’s true that some are revanchists saying “follow me and I’ll lead you back to the good ole days.” And I agree, we must avoid such sentiments. But so too affected presidents who proclaim, “The people have decided and I must go with them for I am their leader.”

I’m continually struck by how many have done that. And even more how so many of my peers – my betters – are disappointed that I will not live down to their expectations. That what kind of cheeky nonconformist am I to not get in line and, for the sake of crowd-building (which they call evangelism), that I won’t endorse things or preach about things that I don’t believe to be true. To me it’s been shocking to watch people I have known for years who are willing to do exactly that.

16 thoughts on “Is There A Unity Cult Within The Restoration Movement?”