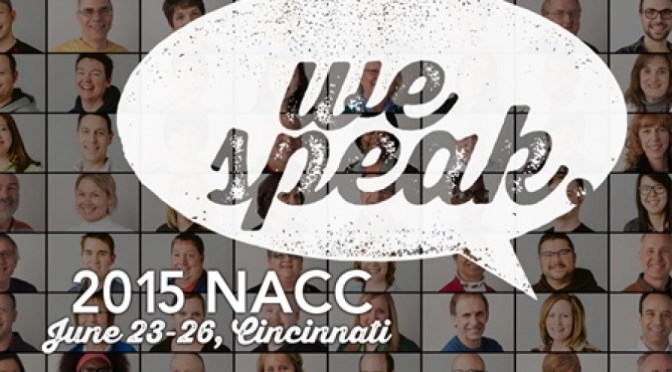 In the world of ministry among Independent Christian Churches, there is one event that is as predictable as Christmas: In July, the annual North American Christian Convention comes to some fortunate Midwestern city where 10,000 Christians blissfully check-in to what many fondly refer to as one great-big family reunion. In recent years, however, the convention has changed. In the era of mega-churches and the celebrity pastor, it has become – for better or for worse – the Oscars of the Restoration Movement. A self-congratulatory goat rodeo directed by an insular, elitist group of predominantly mega-church pastors, some of whom seem to be more interested in ego-stroking than the movement they purport to honor. The award-winning air within this enmeshed community is no better exemplified than in Tim Harlow’s Summer at Parkview website video introduction of special speaker Mike Baker dated 8/3/14. As he stands in front of the camera, trophy in hand, he announces that Mike will be next year’s NACC President:

“what just happened on Friday of my convention, I gave this gavel, representing the presidency of the North American Christian Convention, to my friend Mikey.”

The only thing missing was the acceptance speech.

Blogger, Peter Rasor, recently weighed in on this phenomenon in two comprehensive and objectively penned posts entitled My Reflection Upon the NACC – Or, the Good, the Bad, and the Ugly of a Movement in Crisis and An Open Letter to Mike Baker, Next Year’s NACC President. Among other things, Dr. Rasor criticized the NACC for not acknowledging the people who are actually doing the bulk of ministry in this country, i.e. ministers of small-to-medium congregations – it is a valid point. He goes on to charge that “the NACC is entirely led by ‘mega-church pastors.’” A concern that, to my knowledge, has not yet been recognized, much less addressed. And if the responsive comments from next year’s NACC President, Mike Baker, is any indicator, I doubt we are going to see an increase in the number of small-to-medium congregation ministers, bible college professors, or even missionaries speaking this year – people who, again, comprise the backbone, heart, lungs, blood, and muscle of the movement this organization claims to represent. Inspiring even less confidence about the unity of the NACC specifically (and perhaps the Restoration Movement in general) was the very public and ham-fisted reaction to the barrage of internet discussions sparked by Dr. Rasor. In particular, Executive Continuation Committee member and California mega-church pastor, Caleb Kaltenbach whose smart, savvy, prayerfully-considered decision-making process led him to delete any comment from his Facebook ICC minister’s discussion group which dared to offer anything but praise for the convention (and those leading it); he then went on to permanently excommunicate from the online forum those guilty of expressing such opinions  – reportedly saying, “I don’t care what anyone thinks.” A curious position to take for someone on the Executive Committee. I can only hope he was not speaking on the committee’s behalf.

Don’t get me wrong, as I am happy to support the NACC, but I agree with Dr. Rasor, it has much still left to do that would make it worthy of much more support and credibility. There are too many issues within the Restoration Movement that need to be raised, discussed, highlighted, challenged, corrected and questioned that the current leadership does not find the will to indulge into. That is what makes it a farce for me at some level.

For example, how do we reconcile multi-site churches with our Restoration Movement principles? Proven church-planters, guys with congregations of over 1,000 thriving members, ministers who’ve already beaten the odds, who have had and still have a successful God-ordained ministry, what makes these guys over-reach? Often, the original flagship operation is a simple, straightforward concept: a new church in a new community, or a re-launched church in an existing community, or simply a well-established church that never stopped growing. But success makes these guys feel invulnerable. They must be geniuses, right? They have drawn hundreds if not thousands of people into their own auditoriums! So rather than planting other autonomous congregations as was done in the first century, why not franchise and open a 500 seat satellite-campus with simulcast sermons and a merchandising outlet in another community? The answer is so simple. Because it’s not Biblical.

Changing lives, bringing hundreds or thousands of people together in a single Bible-based congregation? What’s wrong with that? You’re blessed man! Keep up the good work! Why this sudden urge to expand an empire into a theologically-questionable, mini-denominational operation? As Dr. Rasor and others have pointed out, one of the big questions that keeps coming back but is never answered is: Are multi-site churches the modern-day precursors to denominations enabled by new technology? Unfortunately this sort of high-level question is never addressed. What better forum to discuss the issue than the North American Christian Convention?

Another issue: Racial Diversity. It just seems like a glaring problem. Rarely can one see so many white people in one room. It really does look like the last George Wallace campaign. Yet we’re talking about a movement that seeks to reach a population that’s between 25-27% non-white.

And while we are on the subject, who is in charge of vetting the presenters of NACC workshops? In the 1990’s I attended the workshop addressing racial diversity. The facilitator’s sole qualification for leading the workshop consisted of his being hired by a congregation that was 40% African American. He, in fact, had nothing to do with the cultural shift experienced within this congregation – as it had happened years before he arrived on the scene – and his comments reflected that reality. Why on earth was he asked to present on this topic? What, exactly, were we being asked to emulate? The credibility has been sorely lacking. Later, I happen to note that the church he represented was a congregation with very deep pockets and a major financial contributor to the NACC.

A couple of years later, the same subject was addressed by a well-known and well-connected former Bible College Professor who proceeded to lift and recite passages from a, then, just released book on racial reconciliation and the kingdom of God. After the session I asked what percentage of racial minorities made up the congregation he was currently serving in Atlanta, Georgia. He reported less than 2%. I further inquired if he had personally been involved in reaching or simply befriending a member of any minority group within his own community (one of the action points he passionately challenged his audience to seize upon). Answer – “not yet.”

This past year the racial diversity workshop was co-led by Kevin Holland of Turning Point, an International Church of Christ congregation. For those of you who are unaware, the International Church of Christ is a movement that has singlehandedly poisoned thousands of young people on college campuses in Los Angeles and across the nation with its absurdly imperious system of church discipline. And while Independent Christian Churches have managed to, for the most part, avoid being associated with this group, public perception has taken a hit and congregations like mine have to be vigilant about making the distinction, something that continues to this day. But I digress. My point is, addressing the subject of racial diversity should never require us to associate with such a toxic wing of the evangelical world. In the comments section of Dr. Rasor’s Good-Bad-Ugly post, African-American Minister Michael Vereen, who has served First Christian Church of Florence in South Carolina for fifteen years, reports that he has never even been approached. I, for one, would be interested to hear what he might have to offer in the way of accommodating the ethnic/cultural diversity of our movement by creating authentic pathways for expression in the program of the NACC and within the Restoration Movement at large. Don’t get me wrong, I don’t have anything against the Dream of Destiny. But for the dream to become a reality, it has to be concerned with more than just window dressing. Let’s face it, when minorities are invited to the NACC they are asked to assimilate and leave their cultural differences in the parking lot. Simply hiring and staging people based on skin color without asking them to influence the cultural fabric of the event is disturbing. No one, afterall, wants to be known as “the brown guy ” who was hired to prove the groups openness to racial diversity. Why not seek out and ask people like Mr. Vereen to share their unique perspectives or to provide practical ideas aimed at cultural accommodation?

Dr. Rasor is correct – the movement is in crisis.  This is the Brave New World of the celebrity pastor. A world where cynical, performance-oriented, lowest-common-denominator-theology is center stage. But an approach that is difficult to criticize. After all, the weekly audience size has exploded in these churches. There is an unimpeachable logic to your argument when no matter what one may say about what you do – or even how true their observations might be – you can respond with two words: “It works.” Whatever these celebrity pastors have done, it is working. That success ensures that whoever complains about “quality” or “sound theology” appears quaint – even deranged. And for that reason, for me at least, the NACC is quickly becoming irrelevant. It has become an awards show which provides a platform for self-promotion for those who least need it and the illusion of importance to those who increasingly have nothing to say of any significance to the fracturing movement they claim to support and love.

One thought on “Peter Rasor, The NACC, And The Era Of The Mega-church”