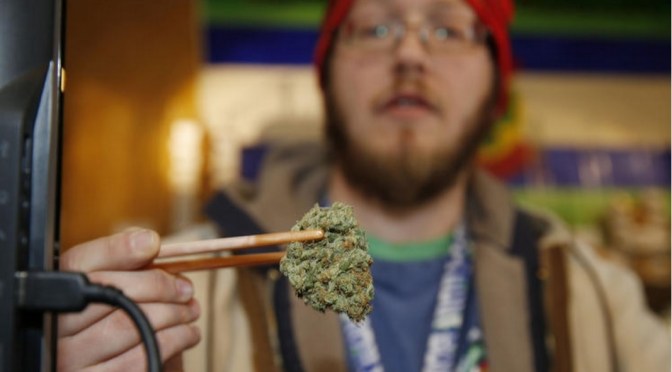 We have come to a point in this country when the legalization of marijuana has acquired an aura of inevitability – even among Christians. This perception notwithstanding, the following is an invitation to pause and consider the in-coming evidence – otherwise future generations may look back and charge us with the self-deluded act of deposing reality in order to crown our utopian surreality. The simple fact of the matter is, there is no reason why Americans should resign themselves to the social acceptability, legal entrenchment, and widespread availability (kids included) of marijuana. This headlong rush into disaster should be and can be stopped.

Where are we now?

Currently, twenty-three states have laws legalizing marijuana in some form. Last month, officials in the District of Columbia decided to move ahead with plans to implement a marijuana initiative approved by voters.

How did we get here?

The shift in public opinion has been dramatic. In the early and mid-2000s support for legalizing marijuana across political lines hovered between 30 and 36 percent. Today, support for legalizing marijuana has a slim majority with 52% favoring its legal use as of October 2014. That trend is driven largely by the Millennial generation, who support marijuana at much higher rates than their elders – regardless of faith.

Here is the breakdown for evangelical Christians:

Indeed, a Wall Street Journal/NBC poll found that young adults are more interested in states’ legalizing marijuana than in other major news stories such as Obamacare, the crisis in Ukraine, and same-sex marriage. The same poll found that Americans believe sugar to be more harmful than marijuana.

What is at stake?

We have reached a dangerous and absurd moment when there is unprecedented support for the legalization of a substance that is demonstrably harmful to the health and safety of individuals, as well as to the fabric of our nation.

The great political scientist James Q. Wilson staunchly opposed the legalization of drugs. Most of his career was spent as a professor at UCLA and Harvard. He gained national attention for a 1982 article introducing the ‘Broken Windows Theory.’ The theory states that maintaining and monitoring urban environments to prevent small crimes such as vandalism, public drinking and toll-jumping helps to create an atmosphere of order and lawfulness, thereby preventing more serious crimes from occurring.

He explained that “drug use is wrong because it is immoral and it is immoral because it enslaves the mind and destroys the soul.” No society should want unhealthy substances destroying the minds, bodies, character, and potential of its citizens. As Wilson put it, “The central problem with legalizing drugs is that it will increase drug consumption.” Experience shows that when previously controlled substances become permissible they are more widely used.

So the question becomes: Do we want the damage from legal marijuana to approach the damage done by legal alcohol?

Even in states that have allowed only medicinal marijuana, use among young people has risen. Christian Thurstone is one of the leading child psychiatrists in Colorado and head of the teen rehab center Adolescent STEP: Substance Abuse Treatment Education & Prevention Program in Denver. He has chronicled firsthand the increase in marijuana use among adolescents since Colorado legalized medicinal marijuana in 2009. According to the education news website co.chalkboard.org, Thurstone reports hearing the seldom omitted refrain from pot-smoking students: “Marijuana is healthy. It helps me focus in class. And, hey, it’s better than alcohol or cigarettes.”

As one would expect, today’s marijuana laws in Colorado prohibit use by children. But this prohibition—as with alcohol and cigarettes—has proven ineffectual in a state where pot is now available in vending machines. The pot-tarts and marijuana-infused sodas, brownies, cookies, and pasta sauces that already line the shelves of Colorado’s pot shops obviously target youth.

What does science have to say?

The medical science is clear: Marijuana use has deleterious effects on health and behavior, especially among the young. Among its most damning findings at Harvard-affiliated McLean Hospital was: “Heavy cannabis use in adolescence causes persistent impairments in neurocognitive performance and IQ, and use is associated with increased rates of anxiety, mood, and psychotic thought disorders.”  In one of the most significant studies ever made spanning three decades, researchers found that frequent and persistent marijuana use starting in adolescence was associated with a loss of an average of 8 IQ points measured in mid-adulthood.

At the Wall Street Journal, Pete Wehner argues the push for the legalization of marijuana is at odds with recent science about its harmful effects. Here’s an excerpt:

“The potency of marijuana is much greater than in the past, with the mean concentration of THC more than doubling from 1993 to 2008. “It’s much more potent marijuana, which may explain why we’ve seen a pretty dramatic increase in admission to emergency rooms and treatment programs for marijuana,” Nora Volkow, director of the National Institute on Drug Abuse, told the New York Times last year. Medical research is piling up about marijuana’s negative effects on brain development, particularly for young people. Staci Gruber, a leading figure in neuroimaging at McLean Hospital in Boston, reports that imaging scans have found detectable differences in how their brains worked.”

And now even casual pot smoking has been linked to harmful brain abnormalities. Last year, an important study by researchers at Northwestern University to be published in the Journal of Neuroscience found that young adults who smoked pot only once or twice a week still showed significant abnormalities in the part of the brain that deals with memory and motivation.

Marijuana, of course, is a gateway drug. Even the authors of ‘Marijuana Legalization’ admit that “kids who use marijuana—particularly those who start marijuana use at a young age—are statistically much more likely to go on to use other drugs than their peers who do not use marijuana.”

What is the social impact?

The consequences of marijuana use are not restricted to individual users. Over the last 10 years, fatal car accidents involving people who were stoned have tripled, according to a report in the American Journal of Epidemiology.

Although overall traffic fatalities in Colorado have gone down since 2007, they went up by 100 percent for operators testing positive for marijuana—from 39 in 2007 to 78 in 2012. (Colorado legalized marijuana for medical usage in 2009, before legalizing marijuana for other uses in 2012.) Furthermore, in 2007, those pot-positive drivers represented only 7 percent of total fatalities in Colorado, but in 2012 they represented 16 percent of total Colorado fatalities.

Some say legalizing pot will rid us of the big crime syndicates. But when asked how much drug-related crime, violence, and corruption marijuana legalization would eliminate, the authors of ‘Marijuana Legalization’ admit, “Not much.” To date, police in Colorado report that the black market is alive and well. With taxes on legal pot running 25 percent, cartels can provide cheaper, untaxed weed, and consumers will buy it.

Proponents of legalization claim that pot smokers (particularly young black males) are crowding our prisons. This couldn’t be further from the truth. The U.S. criminal justice system is the single largest referral source for drug treatment programs. What’s more, those serving time for marijuana possession alone account for less than 1 percent of the state and federal prison population, and most of these prisoners are drug dealers who pleaded guilty to possession in exchange for a lesser sentence.

What do supporters of marijuana legalization offer in response to these facts?

In January 2015 Colorado state health officials, in an effort to address these growing issues, announced a new $5.7 million campaign aiming to promote marijuana use, but only of the responsible kind. The ads are to be “bright and neighborly.” But trying to teach folks “responsible use” of a neurotoxin is a bit of a non sequitur, sort of like promoting the safe use of lead paint in your infant’s nursery. That comparison is not far-fetched; according to Forbes exposure to lead paint has been estimated to cost children approximately 7 IQ points in later life. As mentioned above research on marijuana estimates that chronic youth use can cost them fully 8 IQ points.

The response lacks common sense – acquiescing to drug use as “inevitable,” and then seeking to mitigate the impact while allowing the disease of addiction to grow and spread? I mean, if the crusade to dissuade the public from marijuana use is futile (which was the rationale for passing legalization laws in the first place), how effective will a campaign be to promote restraint after the fact?

In yesterday’s assembly at the Columbus Metropolitan Club Forum, proponents change the terms of debate rather than addressing the facts. They talk about economic booms, criminal justice inequalities, and underground capitalists. But the claims that if we legalize pot we can reap economic benefits from taxation and regulation, right wrongs in the criminal justice system, and undercut the criminal cartels are mostly false. Early revenue estimates from Colorado’s own legislative economists have already been revised downward. In any case, a few more dollars for state governments to spend pale beside the societal costs of wasted lives, incapacitated employees, doped-up students, and stoned parents neglecting life and family responsibilities.

In June 2014, the New York Times began a multi-part editorial series in favor of repealing the federal ban on marijuana. It published 11 articles last month alone.

Community leaders, educators, law enforcement personnel, and researchers at the University of Colorado medical center are the ones assembling the evidence from the front lines, from schools, hospitals, burn centers, and treatment facilities. A portrait is emerging of considerable, and rising, damage. Meanwhile, legalization advocates like the NY Times are proclaiming that all is well.

We are at a crucial time in our nation’s history, engaged in a once-in-a-lifetime debate over a national health care system and still struggling to improve schools whose graduates are behind their peers in many industrialized nations. On top of all this, do we really need more potheads? Do we need a dumber country?

In just the last 24 hours, the LA Times cautioned its readers:

“The Times won’t take a position on a 2016 marijuana initiative until the ballot language has been released . . . But general, theoretical support may not be enough. If legalization proponents are serious about passing a ballot initiative, they’d better be sure they put forward a comprehensive, well-thought-out proposal that addresses the complex legal, societal and safety issues involved.”

Jerry Brown, the Democratic governor of California, was recently asked about legalizing pot in his state, and he put it this way: “How many people can get stoned and still have a great state or a great nation?”

New Jersey governor Chris Christie opined on his monthly radio show, “I am not going to be the governor who is going to tell our children and our young adults that marijuana use is okay, because it’s not. You want to elect somebody else who’s willing to legalize marijuana and expose our children to that gateway drug and the effects it has on their brain? You’ll have to live with yourself if you do that, but it’s not going to be this governor who does it.”

Perhaps that is why – in spite of the growth of popularity in the last decade –  the national support for legalized marijuana has slipped by seven percentage points in the past year, from 58 percent in 2013 to 51 percent today, according to Gallup.

What we see in Colorado has the markings of a drug use epidemic. Epidemics subside, but after the outbreak, the populace often settles into a new normal, at higher levels of the disease. The damage is difficult to reverse, and of those caught in the outbreak, not all return.

Drug policy should be based on hard science and reliable data. And the data coming out of Colorado points to one and only one conclusion: the legalization of marijuana in the state is terrible public policy.

The evidence to date is stunning. It is time to stop pretending otherwise. It’s not too late.

One thought on “The Evidence Is In: Marijuana Harms At Every Level”