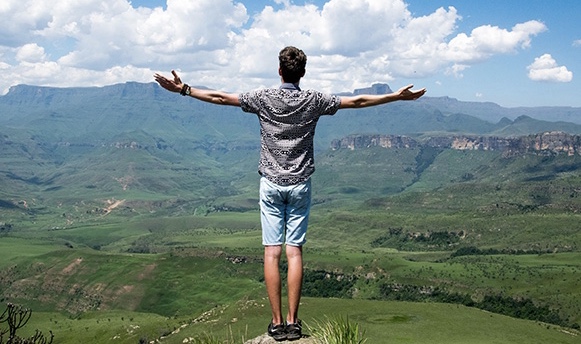 (This is the third and final esssy of three)

We are in the Post-denominational era and what do we do?

We now come to the fifth paradigm, which might be called Dominionism, that could help sustain the Restoration Movement in the Post-denominational era. An era in which we find ourselves at odds with the same spiritual opposition, but with a different facade: not the old external challenge of centrally-controlled Protestantism, but a centrally-controlled Pragmatism which has taken root within our own ranks.

Dominionism does not define success in terms of size, nor solely as doctrinal purity, but in the expression of Kingdom values. And those values identify one supreme value, what Paul refers to three times in the first chapter of Ephesians as “the praise of His glory.”

That is the credo of the Church.

Put more simply: We are the children of God seeking to glorify God, by bringing all things under the authority of Jesus Christ until God’s Kingdom is made complete.

Beyond numbers. Beyond treasure. Beyond humanitarian efforts. Beyond mere orthodoxy. The Church exists to bring all things under the dominion, the tutelage, the subjection of Jesus Christ. Beyond evangelistic campaigns for the human heart – which are essential but not sufficient – we campaign to bring the Kingdom of God to bear on the world in every area. In the practice of medicine, the administration of government, the application of justice, the world of finance, the facilitation of social science, the sphere of family life – all things are brought under the subjection of Jesus Christ through the moral agency of the Church. This makes the Church the quintessential institution for a civilized society, for it is the pillar and foundation of all truth.

So, then, Dominionism views the engine of the Church, not as the will to build a crowd but the will to glorify Jesus Christ in all things. Dominionism is not utopian. In fact, its attractiveness is precisely that it has appropriate contempt for the fiction of Tribalism. It shares Realism’s insights about poorly conceived models of unity based on revolutions of human nature rather than revolutions of our new nature in Christ.

Moreover, Dominionism asks for a sacrifice from its adherents. Realism does not. It merely provides confirmation for orthodox tenets and beliefs. Dominionism is an improvement over Realism. What it can teach Realism is that the pursuit of sound doctrine is not just an end but a means, an indispensable means for securing spiritual strongholds. Dominionism expresses itself through Christian values, which are inherently more sensitive to those who suffer, less belligerent to those who don’t yet agree and generally more inclined to win the support of others. Don’t get me wrong, Realists are correct that protecting sound doctrine requires “taking special note” of those “who must be silenced” and “reprove them severely” of false doctrines (2Th. 3.14, Tit. 1:13). But that technique, no matter how satisfying, has its limits. At some point, you have to implant something, something eternal and life-giving. And that something is implemented as Christians praise the glory of His grace.

But where do we start?

Today, still early in the 21st century, we can see clearly the two great spiritual challenges on the horizon: the inexorable march of Pragmatism and the continued drift toward a theological melting-pot called Evangelicalism, both of which threaten to irrevocably disequilibrate our affiliation.

And our problems are the crumbling of our institutions and a monomaniacal ecclesiology which crudely reduces the mission of the Church down to a single, mind-numbing criteria: how big is the crowd?

For many, the demise of the North American Christian Convention followed closely by Cincinnati Christian University was a concussive blow, but for all of its shock and surprise, it is simply an old problem with a new face. Both events felt like the beginning of the end, an initiation of a dark new history, but it was a return to a familiar history, the 20th-century history of liberal theologies and centralized control.

To be sure, the anomaly is not the RM of today. The anomaly was the 1980s and early 1990’s – our holiday from history. An interval of dreaming between two periods of reality. So that by the time evidence of our own existential crisis began to show – in the late 1990’s and early 2000’s – our pose of bewildered by-standing only compounded the reality.

A reality from which the events of the last year awoke us, indeed, startled us into thinking this challenge was new. It’s not. What is new is what happened not over the last year but well over a decade earlier when we discovered denominations were in decline: the emergence of Evangelicalism and its melting-pot expression of the Christian faith.

What are we to do?

The Pragmatists (described in the first essay) are willing to defenestrate anything that gets in the way of their nihilistic pursuit of bigger crowds or more control.

The Protectionists want to maintain status quo by simply ignoring what’s happening outside their walls; pull up the drawbridge and defend the Independent Christian Church Fortress, all the while refusing to acknowledge they have no moat.

Then there are the Tribalist. They like to dream, and to the extent that they are aware of doctrinal standards, they don’t like them. They see our Movement – being used for anything other than Humanitarianism – as an expression of selfishness and pride. And they don’t just want us to ignore doctrinal soundness, they want us to yield it piece by piece, by subsuming ourselves- as good and tame tribesmen – to a new evangelical framework.

Then there is Realism, which has the clearest understanding of the rising chaos —charting faithfully just how unmoored from truth we have become. But in the end, it fails because it offers no vision. It is all means and no ends. It can not adequately define our mission.

Hence, the fifth view: Dominionism. It can — or could, or should — in the upcoming decade, rally Christians to join in the struggle over values. It seeks not only to restore but to vindicate the doctrines and practices of first century Christianity. And to do so by glorifying Jesus Christ collectively and expressing our values publicly, as both the ends and means of our movement.

I support that. I applaud that. But I believe it must be tempered in its aspirations so as not to be hijacked by a social justice agenda of do-goodery Humanitarianism. It must be targeted, focused and limited by our mission. We are concerned for all who suffer, but we come to aid only in contexts wherein our deeds can be freely and openly attributed to Jesus Christ – His glory is paramount. (John 12:5-8)

In the late 1990’s, disillusioned by the death of so many ICC congregations, coupled with an equally shaken national gathering, our brotherhood came to the edge of the abyss. This past year we find ourselves, once again, peering over its edge. But this time the threat is internal.

Were that the only difference between now and then, our situation would be hopeless. But there is a second difference between now and then: the rising foreknowledge of a transparently reckless agenda, designed to benefit a tiny group of unprincipled elitists. That evens the odds. Don’t misunderstand, the venal nature of the current establishment opposing our values is something beyond our control. But our commitment to express those very same values is within our control. And if we act wisely, constrained not by illusions or fictions but only by the limits of our mission – which is to seek His glory (rather than our own celebrity) as an antidote to nihilism – we can prevail.

*Correction: It has been pointed out that the term “Dominionism” is already in common use but with a very different meaning. An effort will be made to avoid this confusion in the future. 11/19/19 11:23am PST

Terry Sweany has served as senior pastor since 2006. His education includes a MA in Miarriage, Family, and Child Counseling from Hope International University and a BA from Cincinnati Christian University. He is author of the book Life In Ministry and his greatest joy is helping people deepen their relationship with God. Terry lives in Westchester, California  and is a member of the LAPD Pacific Division Clergy Council. He and his wife, Patty, have been married 32 years and have a daughter and grandaughter

6 thoughts on “The New Era”