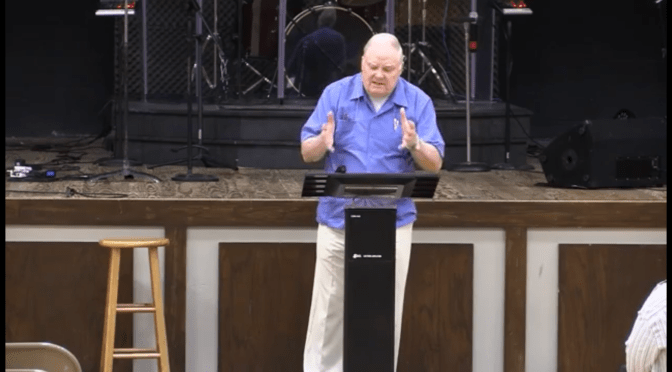 The current state of the Restoration Movement (RM) has a lot of people concerned. Between the national decline of religion in general, and the growing sense of drift and disarray within our own institutions, few have avoided the convulsions.

Ever since it became clear that exhausted mainline denominations were shrinking out of existence, the quest has been on for a new vision to govern our future. In 2016 the North American Christian Convention (NACC) President, along with a handful of self-appointed prognosticators, initiated a crusade of pragmatism declaring that doctrinal differences within our movement would no longer matter – “the day of the denomination is dead,” they scolded.

What they failed to grasp, however, is that visions of the future are not created in the abstract; they are a response to a perceived set of circumstances. Accordingly, their thinking about post-denominational Christianity was framed by several conventionally accepted assumptions.

All three of these assumptions were mistaken.

First, the post-denominational world is not reorganizing around generational preferences. Wide swaths of Millennials, just like Gen-Xers and Baby Boomers, still highly value religious affiliations. There are some 83 million Millennials, defined as Americans born between 1981 and 1996. It’s next to impossible to generalize about a group of people this large (roughly the size of Germany). Within the ranks of Millennials there are committed Mormons, entrenched atheists, and everything in between. Denying this reality is to cultivate a lazy, pernicious form of age-bias, preventing churches from accepting and ministering to people as they really are.

It’s true, Millennials remain more liberal and look more cynically toward organized religion than other age groups. But so what? Eventually, people grow up. They may well learn that their cynicism towards Biblical doctrine and institutions was misplaced, especially as the single lifestyle gets old and they find the wisdom they were looking for in cross-generational relationships.

Second, the perceived consent for welcoming various tribes into our national gatherings was grossly overestimated. In fact, that very consensus is under renewed assault. The assault comes not only from the usual pockets of doctrinal conservatism (e.g. the Restoration Herald) but from a resurgence of churches and institutions alarmed by the sudden tectonic shift in our shared beliefs. Illustrating the point, Spire Network’s October 8th scheduled platform launch – which promised a unified movement that would carry us to the sunny uplands of history  – was apparently postponed due to a lack of participation. Last week’s inability to secure the minimum number of subscribers necessary to initiate Spire’s online platform was more than just a failure to launch; it was a restraining order.

And third, the emergence of a new threat marked by mini-denominational, mega-churches. These market-driven monstrosities – deformed by secular organizational charts, crowd-sourced false doctrines and the means to promulgate them – make the coming decades a time of heightened, not diminished, contention for the faith.

At stake is the extent to which Independent Christian Churches will, with diminished support from fewer institutions, inoculate themselves from a culture of generic evangelicalism defined by embracing Calvinism, down-playing ordinances, promoting feminist agendas, and disconnecting baptism from any sacramental purpose.

Moreover, the state of our movement will rise or fall on the issue of sound Biblical leadership. The lesson of our history is that the task of merely maintaining healthy churches is unending, the continuing and ceaseless work of every generation. We need leaders of churches – not big churches, not rich churches, not Millennial churches, but all churches – participating in the maintenance of our standards. We need leaders who will take stands and go it alone if necessary. Don’t get me wrong, one acts in concert with others if possible. And it’s so nice when others join us in the breach. No one seeks to be unilateral. But one does not allow one’s identity to be held hostage by the will of others.

Since our affiliation came into existence, God has used faithful men with uncommon character and intellect to keep our movement moored to the Word of Truth. Men who stood athwart history, yelling Stop, at a time when no one else was inclined to do so. P. H. Welshimer acquitted the movement quite well in a pair of unforgettable debates with famed evolutionist and nationally recognized Supreme Court attorney Clarence Darrow. The RM’s two favorite sons, Dr. R. C. Foster and Dr. Lewis Foster, were both doyens of Biblical scholarship within their respective generations – significantly adding to the esteem and the prestige the of Cincinnati Bible College and Seminary. And the prolific Dr. Jack Cottrell, whose name is synonymous with Restoration Movement theology. Dr. Jack has authored over 20 influential books of doctrine, defending conservative views of faith, baptism, grace and gender roles.

But who will be next?

Currently, the movement lacks a strong, widely-known, up-and-coming scholar ready to pick up the fight and lead us into the future. Dr. Cottrell and his Christian Restoration Association contemporaries are quickly coming to the age of retirement or failing health. And if no one emerges soon, our movement may continue to decline.

Nothing is inevitable. But if we make the right choices, if we reassert our spiritual framework, perhaps even reinstate our national convention or something like it, we can avert a total collapse. Decline, after all, is a choice.

We are in for abnormal times. Our best hope for surviving in such times, as in difficult times past, is in sound doctrine and Spirit-led living — these will give us the strength and the will to lead our movement; unashamedly laying down solid biblical principles and being prepared to defend them.

Compared to the task of defeating Protestantism, averting the doctrinal chaos of pragmatism is a rather subtle call to greatness. It is not a task we are any more eager to undertake than the great twilight struggle which just concluded. But the task is just as noble and just as necessary.

[The featured image above is taken from a live-cast produced by Central Christian College of the Bible highlighting Dr. Cottrell. The message “Does God’s Word Teach Absolute Truth?” This illustrates the kind of leadership we need, and the kind this post endeavors to describe. It is well worth the time. For those who want to see this presentation in print, see a brief version of it in the “Collected Writings, Vol. I: The Unity of Truth” (The CRA, 2018), pp. 81-103).]

6 thoughts on “The State Of The Restoration Movement”